“The truth is not to be found in an old book!” 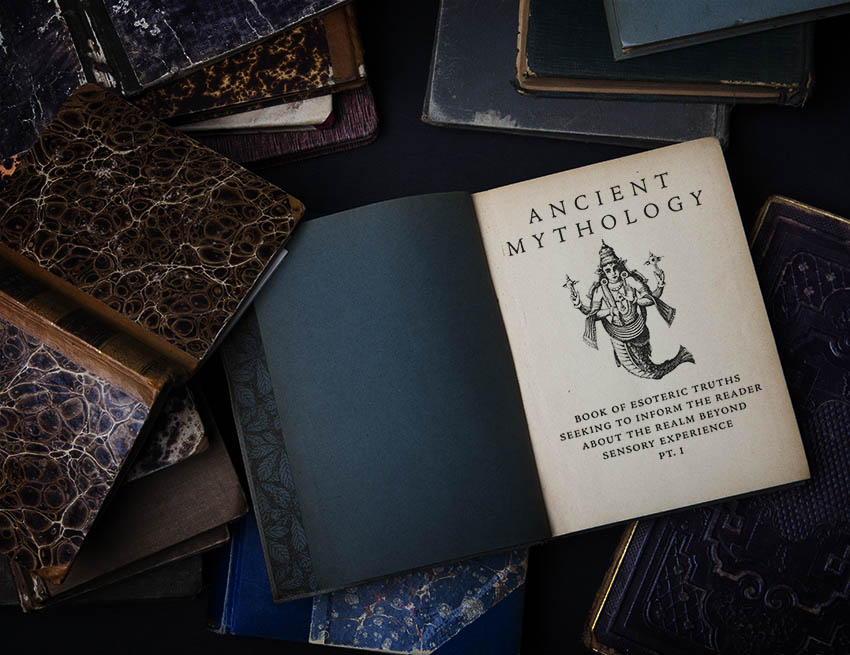 That there is no truth to be found in old books is an argument we encountered on several occasions while telling people about our latest project. The argument itself is as common as it is naive – while the full face of truth regarding this world might not in its entirety be conveyed though words on a printed page, there certainly is no fault in the pursuit itself. The whole sale rejection of the attempt to speak of the world through the language of myths is nothing short of being a fanatical response to the perceived shortcomings of this alternative explanation, disproportionate in its measures.

Myths will, if they are allowed to, illuminate our lives in a way no equation ever will, as they aim their attention to the very core of our being. This does not imply rejection of rationality, but rather admitting the short comings of rational thought as well. The realm of science and mythology need not be at odds with each other – given the chance they might in fact compliment each other in speaking of the world around us.

Swami B.V. Tripurari writes about the Hindu myths or lilas that the book is based on:

“I am often asked what the meaning of  the Sanskrit word “lila” is.  Literally this word refers to divine play. But what is divine and what is play, and how do the two fit together? The divine is that which is independent of the natural world, and according to Hindu revelation that includes ourselves. We are consciousness not matter. We are the experiencer of the sense that “I am.” We are a unit of subjective experiential existence, and as such we are different from the non experiential existence that we call “matter” that makes up the objective natural world.  We experience matter and matter is experienced by us. Matter only matters because it matters to us. And experience does not come out of non experience. So we are not a product of matter and are thus independent of  of the natural world. That is, we as units of consciousness are not reducible to matter. So in this sense we are supernatural or divine.

However, we find ourselves working more than playing, and that out of a perceived necessity to do so. Lest, it would seem, we will cease to exist. That perception is an illusion. Why? Because we are not constituted of matter, but rather the consciousness behind matter, we—as units of consciousness—are not biological in nature. Thus the biological life we identify with and struggle to prolong is not the basis of our existence. Biological death is not the death of our selves, our atma. It is merely the death of that which we have misidentified with, an egoic, illusory self arising out of the natural world.

Yet although were are independent of the natural world, we are not altogether independent entities. Thus we are subject to the illusion of dying when in fact there was never a time when we did not exist nor will we ever cease to be. We are divine but we are not the sum and substance of divinity. God also exists as our consciousness source and ultimately as our significant (consciousness constituted) other. There is enough difference between our selves and our source to make room for love. That love, wise love, plays itself out as lila in a playful life free from spatial limitations, time, and toil.

The descriptions of lila we encounter in the Eastern revelation are windows to a world of divine play, where the word impossible is conspicuous by its absence. They speak to us as to the nature of enlightened life, where love is the end of knowledge and thus there are two, God and ourselves, two hearts one in will. Events portrayed therein are not irrational but rather trans-rational. Properly understood they serve to dethrone the irrational, egoic, biological self that seeks to exploit the natural world from its imaginary mental empire and free the atma from the royal illusion of an emperor pretending that work —the struggle for existence—is play. It’s not.

And it is a playful God that is all powerful, for in order to play one must have the power to do so. To vacation one requires the power of time off and money saved. A playful God has nothing to accomplish. Lila is the play that the boredom of God’s omniscience leads naturally to. Knowing everything takes the fun out of life. Thus God ultimately plays. And we are invited to play along through the yoga of love—bhakti-yoga. How real then is lila? Play is what we do when we are most ourselves, most real. All other movement is superficial at best.

Lila is not movement in search of something one does not have, a perceived biological necessity. It is the movement that arises naturally out of experiencing the fullness of the atma unto itself and in union with its source. It is the movement of divine of love, a celebration, not a movement to avoid cremation. Thus lila is a gift to the world of struggling animation. Compassion is its byproduct. It showcases the immense potential of the self in touch with its source. It is the dynamic union of the finite and infinite in a purely subjective realm, independent of the natural world on the one hand, and on the other it makes enduring meaning out of the objective world of matter, understanding it as the theater that serves to showcase God’s compassion.”